What’s a page boy and should I have one?

One of the lovely things about getting married, is that although your wedding day is primarily about the two of you and your commitment to each other, it is also a fab opportunity to involve your nearest and dearest and make them a part of your celebrations.

And one way of doing this is by having a wedding party; best men, ushers, grooms men, brides maids and flower girls etc, which in general are made up of close relatives, close friends, nieces, nephews or your own children.

One role however, which has started to fade out a little, is that of the page boy. Many couples now do not have a little man to carry their rings down the aisle for them or to hold the bride’s train.

It’s by no means scientific but I definitely notice that over the course of a summer of weddings, I see far more flower girls than I do page boys or ring bearers. 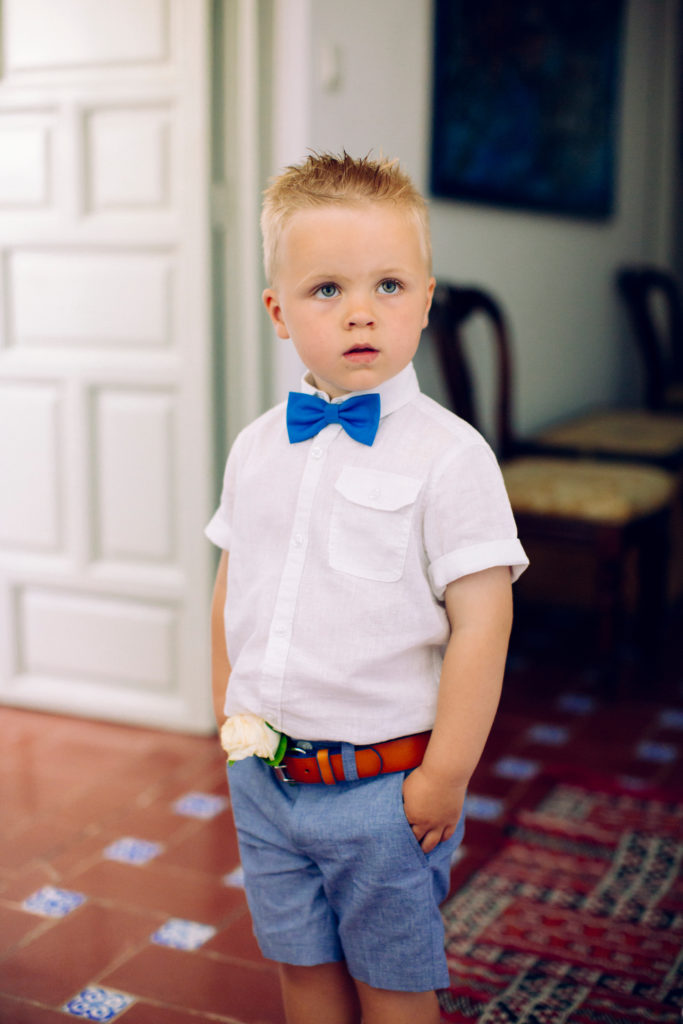 The cutest page boy in town! Photo by Albert Pamies.

Historically, the page boy was actually a young servant who was put in charge of carrying the bride’s wedding dress train. With time, when servants no longer existed, it became the role of a young male family member or close friend. A s for a ringer bearer, he is basically a promoted page boy. Another young boy who is put in charge of the wedding rings and usually carried the rings to the ceremony on a ring pillow. In more lavish ceremonies, a bride could have a page boy, for her dress and a ring bearer, for her rings.

Nowadays, we tend to use the words ‘page boy’ and ‘ring bearer’ interchangeably for the small person who will bring the rings into the ceremony. With trains not being as common as they used to be (unless your Kate Middleton) the need for a page boy as a ‘train holder’ is not as common and simply not needed.

But, although the historical page boy role is not as common anymore, what I am seeing more of is little boys having slightly different roles from the traditional idea and couples are now tailoring the role for what they want in their ceremony.

A ring bearer with a sense of humour, you’ve got to love that. Photo by Owen Farrell

As there really are no rules as to what you want your page boy to do, you can basically give him a variety of roles within your ceremony.

When it comes to choosing your page boy, think about his age and how it corresponds with what you want him to do. Generally page boys are aged between 3 and 12, and obviously the younger he is, the harder it may be for him to understand what he needs to do. And there’s no reason why you couldn’t have two page boys either! Or page girls!

Here are some variations of the different roles I have seen page boys have over the years.

Page boy as a sign bearer – if for example, you would prefer that your best man or best woman is solely in charge of the rings and is the one to present the rings during the ceremony, then a cute and increasingly popular role for a page boy is to be that of a sign bearer at the start of the ceremony. I have seen all manner of signs and I have even seen a page boy with two signs for the start and end of the ceremony. He had ‘here comes the bride,’ for the start and he led the procession back up the aisle with a ‘party time sign! Cool, right? 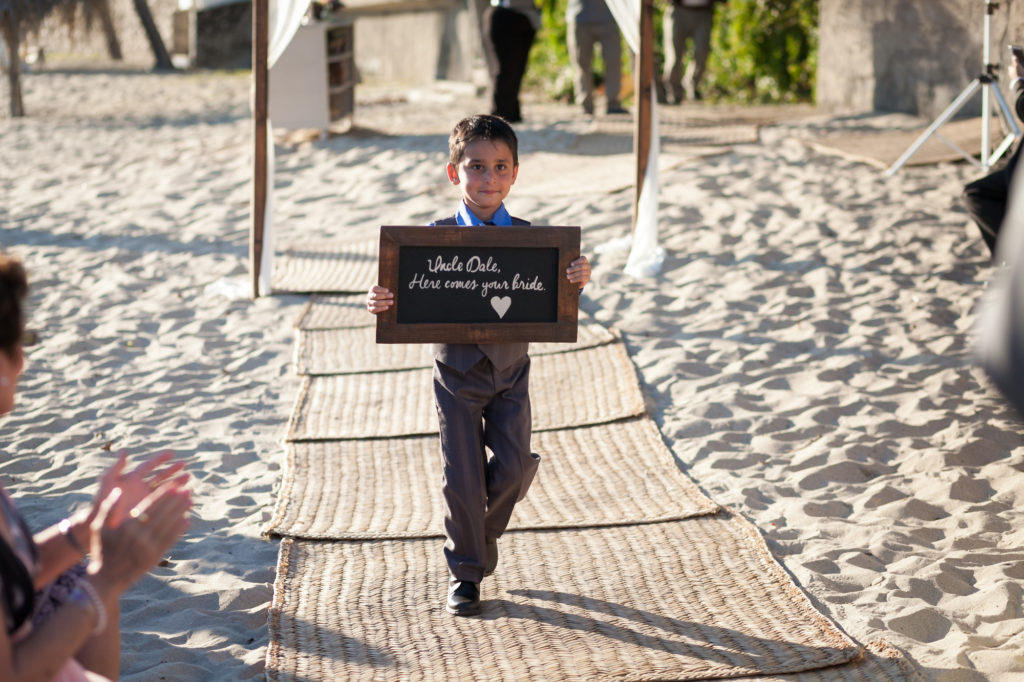 Great use of a sign! Photo by Ulises Guerrero 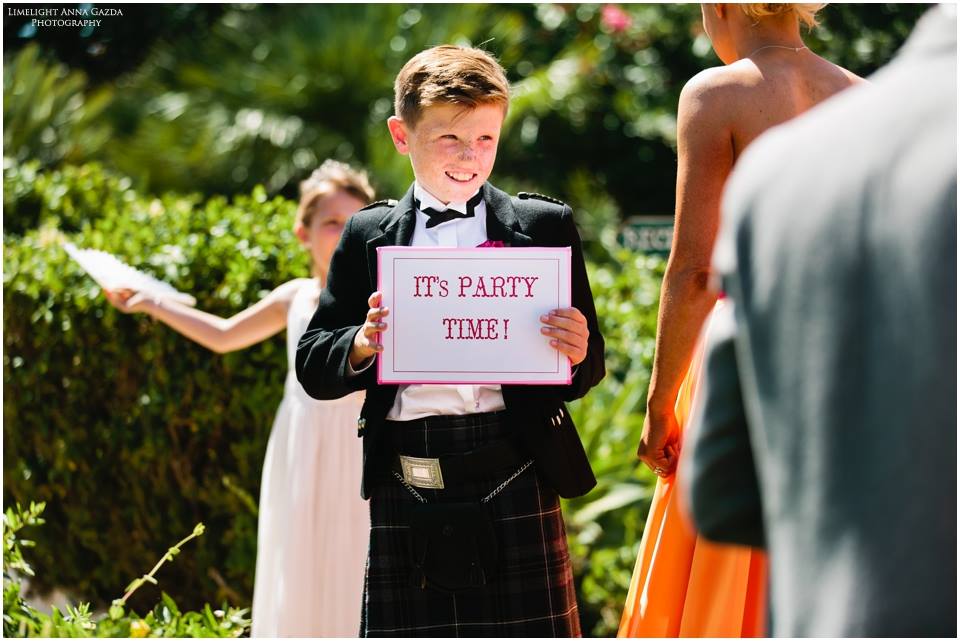 Love this! Photo by Anna Gazda.

Pageboy as an aisle buddy – it’s also now quite common to see pageboys accompany brides or grooms down the aisle. Sometimes couples want to make separate entrances, but don’t necessarily want to be accompanied by their parents or any other adult, and simply prefer the company of a child, who wouldn’t? This is also quite common when couples are parents and want to have their children walk them down the aisle, too, as a nice way of unifying the family. 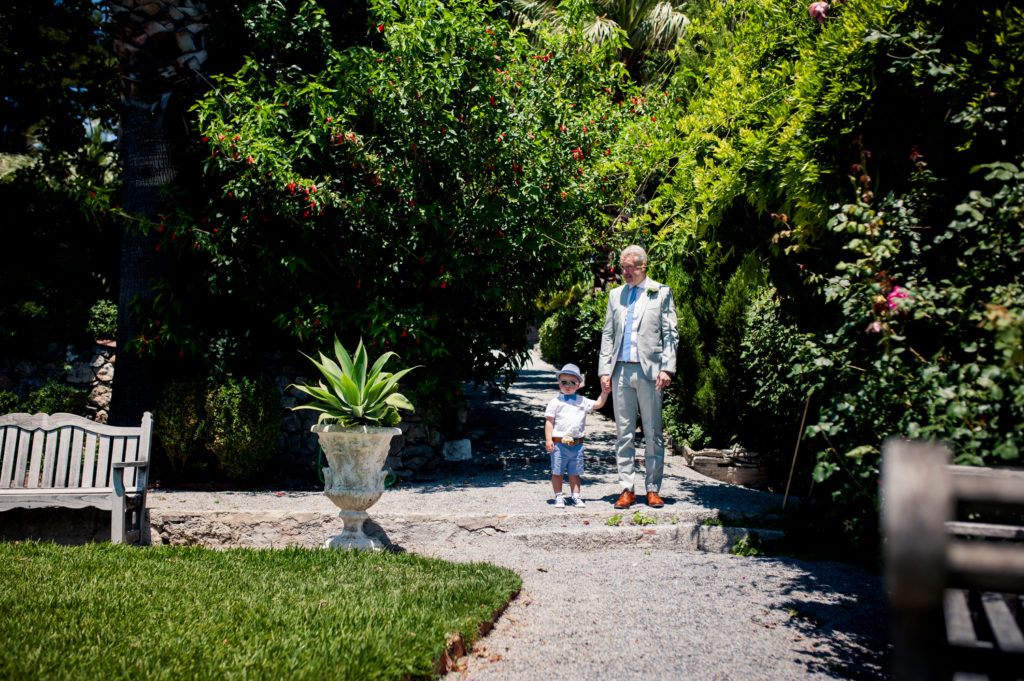 Two very cool dudes about to make their entrance. Photo by Albert Pamies

Page boy as a ring bearer – Even though some couples prefer their best man or woman to be the one to present the rings during the ceremony, some do still like the idea of having a young friend or relative be the one to bring the rings into the ceremonial area. Usually the ring bearer will be part of the ceremony procession and make his entrance before any flower girls, carrying the rings on a pillow or in a ring box. Once he has made his way down the aisle, the ring box/pillow can then be handed over to the best man, who is often already waiting at the front with the groom. The best man will then present the rings during the appropriate time of the ceremony. 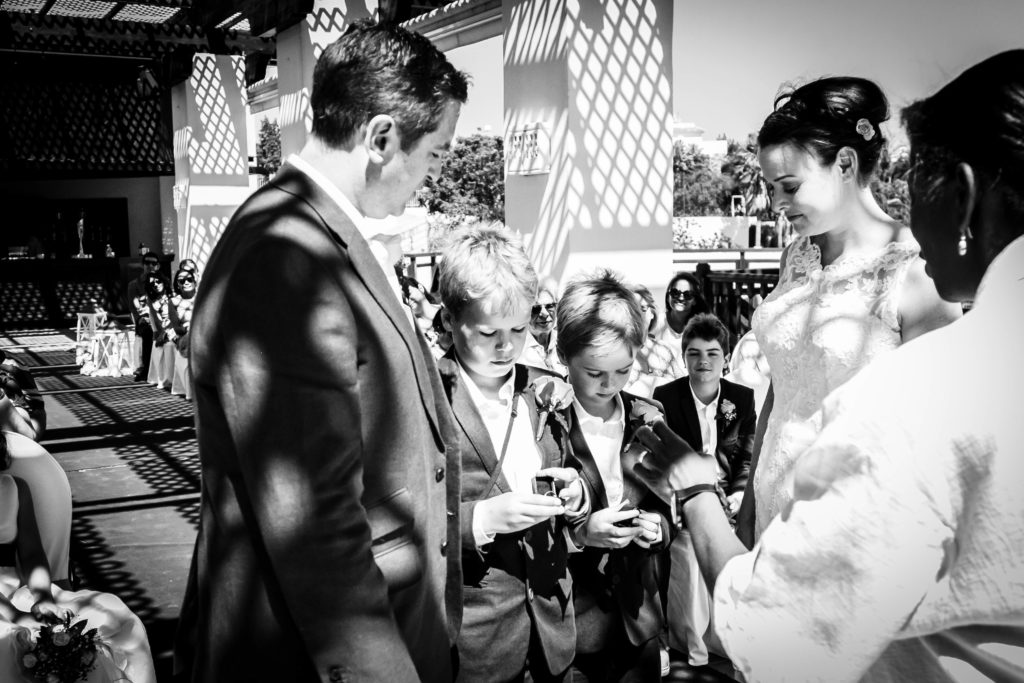 Some couples like to have their children (boys and/or girls) be the sole bearers and presenters of their wedding rings, which is a really lovely honour for any child to have and a lovely way to make a ceremony more family-orientated. This doesn’t need to conflict with the best man role, as he can still stand with the groom at the start of the ceremony and do a speech later, if needed. So everyone gets to do a little something.

One of my favourite ring bearers of all time, was the five year old son of a couple I married a while ago. When I called him forward to deliver the rings, he got up from his seat and walked over to his mum and dad and handed over the rings very carefully. Just as we thought everything had gone to plan, he then said really loudly, ‘Do I get my present now?’ Brilliant. Absolute classic. Sometimes bribery is needed.

It’s a lovely honour, especially for your own children or step-children.

Page boys look lovely and have a major cute factor going on.

You can give a special role to a special family member or friend.

His outfit and the cost of it is usually your responsibility and so you may find their five minutes of fame may not be worth how much it costs!

Whether you choose to have a page boy/ring bearer is of course down to you. You may find it is one more extra role to worry about or simply that it is creating a role that isn’t needed because you have a best man or woman who can be the ring bearer. Or families may find it is the perfect way to centre the ceremony around all of them.

Definitely don’t create the role for the sake of it, because someone somewhere has hinted that there’s a little someone somewhere who’d make such a cute page boy! That you can do without! It’s never a good idea to give anyone a role in a ceremony that you feel you have to. Yes, it’s easier said than done, but it will make your heart feel better in the long run and no doubt be a load off of your wedding budget!

Will you have a page boy on your big day?