Why a church wedding isn’t for you 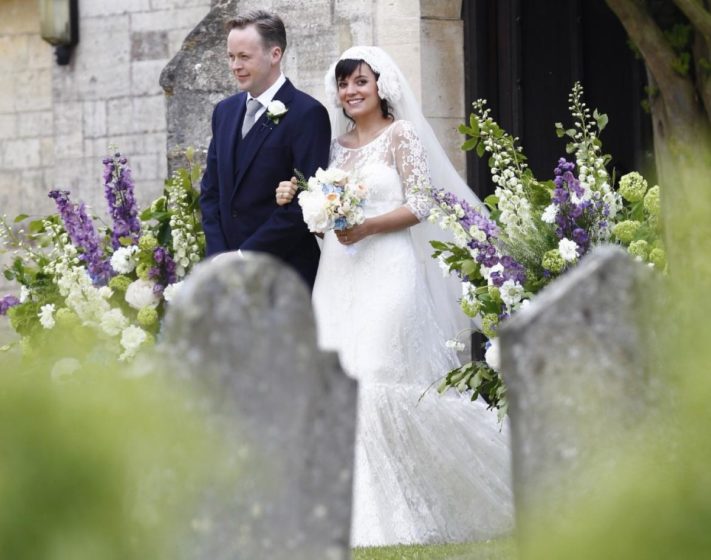 In my hometown, our main church is set on the River Thames, in a location that is second to none. You can sit on a bench by the riverside and simply enjoy the gentle sounds of the lapping water, spot the pleasure boats belonging to retired couples going for a spin, or more likely see the rowers doing a bit of training. Or away from the river you can enjoy the peace and quiet of the beautifully kept gardens around the graveyards, as many people do.

The church building itself is exquisite. Built in the early 1800s, with a spire that makes for such an impressive sight within my small town. I used to love going there on school trips, to learn about the history, to get freaked out by walking next to graves and mostly to enjoy not being at school! It really is so very beautiful though, and I know (from once being a guest) that weddings there look very pretty and idyllic.

But I would not get married there.

And do you know why? Yes, that’s correct. Because I am not religious. And so no matter how stunning the church in my town is, it’s simply not a good enough reason for me to have married there. But believe it or not, there are many people who have no qualms at all about marrying in a church, even if the last time they stepped foot in one was on a school trip. 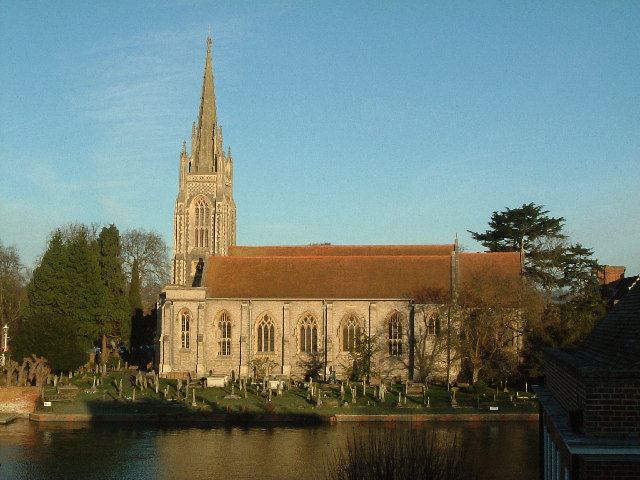 The beautiful church in my hometown of Marlow, Buckinghamshire. This image belongs to Rob Farrow.

I just don’t buy it

Kate Moss, Lily Allen and just lately Andy Murray and Kim Sears all married in churches (Andy Murray in a Cathedral, no less!). Now, I may be wrong. They may all indeed have a great love for the church and a deep-rooted sense of religion that I’m not aware of. Kate Moss might prefer to keep her religious beliefs to herself, because in the twenty odd years that I have followed her career I’ve never once heard her mention God or praise him for her amazing successes, like Beyoncé does in every other sentence. (But maybe that’s an American thing? And us Brits are more reserved!) 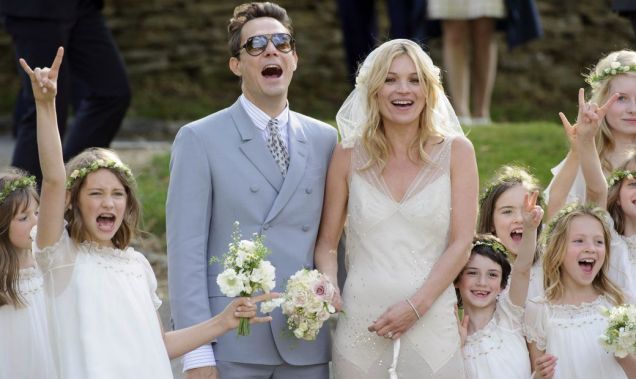 Is Kate and Jamie’s religious faith so strong they thought it proper to have their wedding in the presence of God? Mmmh, I wonder.

The same with Lily Allen. The one who is so outspoken about everything, yet amazingly has never mentioned anything about her strong religious convictions. Again, maybe I am wrong.

And Andy Murray too, when he won Wimbledon and pointed his finger to the sky, when questioned, he would not admit or deny to it being a religious gesture or whether he had found religion. Surely, if he had, he would proudly say so?

In the case of Lily Allen and Kate Moss, I would go so far as hedging my bets that they got married in the churches they chose, because they were quaint, because they were pretty and because they knew it would look good in the photos. I would love to ask them but they’d probably both tell me to ‘eff off and mind my own business’.

I understand in Andy Murray’s case, that he is very proud of his hometown of Dunblane, where his wedding took place and that he has a strong sense of identity with it, especially because of the tragedy (a terrible school shooting that resulted in many children’s deaths) that he was a survivor of, as a young boy. So I understand his affinity to the place and I know the cathedral was very pivotal to the community around that time. However, I still don’t think this reason alone is enough to have a religious ceremony, if you are not religious.

I really don’t want to judge these three celebrities alone, especially as there are many more people, non-celebrities too, who could fall into this category but I do wish to question their motives for getting married in a church.

Even the other day when I was reading a few real wedding stories on some of my favourite weddings blogs, a couple who had had a church wedding seemed to have quite ‘suspicious’ reasons for their church wedding. There was lots about the beautiful village church that they walk past all the time and what a focal point it is, but there was nothing about being Christians and wanting the church wedding because it’s what they believed in. Again, this could just be down to editing and not being able to print everything that couples say. But I do wonder.

So this is my bear bug, putting it very very mildly. People who get married in church, when they really have no business doing so. And I say this because I honestly think that you should only get married in a church if you are religious or have a strong Christian faith, whether you are an active church-goer or not.

It’s simply not enough to get married in a church because;

a) Your parents did

b) Your parents want you to

d) It’s a place of comfort or familiarity and/or

It doesn’t matter if you can say yes to one of these, or yes to all, it’s still not enough.

And also it’s simply not fair. It’s not fair on the poor clergyman or woman who has to prepare your service, putting in valuable time, effort and energy and it’s not fair on your friends and family who have to sit through a religious service which you yourself have no belief in. It’s just plain wrong.

And celebrities who aren’t religious, but get married in a church because they love the brick-work and high beams, are really not helping the case at all.

One of my childhood friends, who I have since lost touch with, was one of the first in my group to get married, probably coming up for nearly twenty years ago, would you believe?They were very young! I remember when she announced that they were marring in the church and I remember thinking, ‘why?’. I may have even asked. Knowing me, I probably did. And even then before I really recognised myself as an atheist, I remember cringing hearing them say their vows and hearing the vicar talk about their relationship in the context of God and religion. I may have even chuckled inside ALOT!

It was ludicrous to equate what was being said with my friend and her husband-to-be, knowing the two of them absolutely did not believe a word of it either. And even more so, watching them standing there, so solemn and straight-laced as though they were on trial and not in fact getting married. After the ceremony, when we were outside the church, my friend, smoking on a cigarette for a bit of relief, said she was glad that it was all over with. Oh dear. No-one should ever think that about their own ceremony. EVER. And true to form, once the reception started, we saw them become themselves again.

The amount of people I have come across who married in a church and who have the defence that they only did it because it was the done thing to do, is astonishing. Especially the older generation who would have had to have had nerves of steel to break out of that tradition and go the registry office route. But you don’t need nerves of steel now, and now more than ever you can get married in the way you want, and have faith in the way that you choose to get married.

A church wedding for you?

If you decide that you still want to get married in a church and recognise that it is more than just a pretty building, you must also be prepared to hear religious texts like this and be in agreement with them and more importantly, vocalise your agreement to them.

In the presence of God, Father, Son and Holy Spirit, we have come together to witness the marriage of bride and groom, to pray for God’s blessing on them, to share their joy and to celebrate their love. Marriage is a gift of God in creation through which husband and wife may know the grace of God. It is given that as man and woman grow together in love and trust, they shall be united with one another in heart, body and mind, as Christ is united with his bride, the Church. Marriage is a way of life made holy by God.

The minister/vicar will also say something along these lines…

and blessed by the presence of our Lord Jesus Christ
with those celebrating a wedding at Cana in Galilee.
Marriage is a sign of unity and loyalty
which all should uphold and honour.
It enriches society and strengthens community.
No one should enter into it lightly or selfishly
but reverently and responsibly in the sight of almighty God.

and then will ask this of you…

The vows you are about to take are to be made in the presence
of God, who is judge of all and knows all the secrets of our hearts;
therefore if either of you knows a reason why you may not lawfully marry,
you must declare it now.

Groom, will you take bride to be your wife?
Will you love her, comfort her, honour and protect her,
and, forsaking all others,
be faithful to her as long as you both shall live?

If you are 100% comfortable with this, if this reflects your everyday beliefs in life and represents the faith that you have, then and only then should you get married in a church. It’s quite simple really. You would not consider marrying in a mosque or synagogue if you were not of those faiths, would you? No you wouldn’t, no matter how amazing the building.

So, if you have found yourself nodding your way through this post, then congratulations people, you’ve now confirmed why a church ceremony isn’t for you! Or conversely, you are someone who whole heartedly is sure that a church ceremony is for you and you are nodding because you also do not like people using the church for their own agenda.

Remember folks, when it comes to your wedding ceremony, follow your heart, your beliefs and your common sense! That’s all!