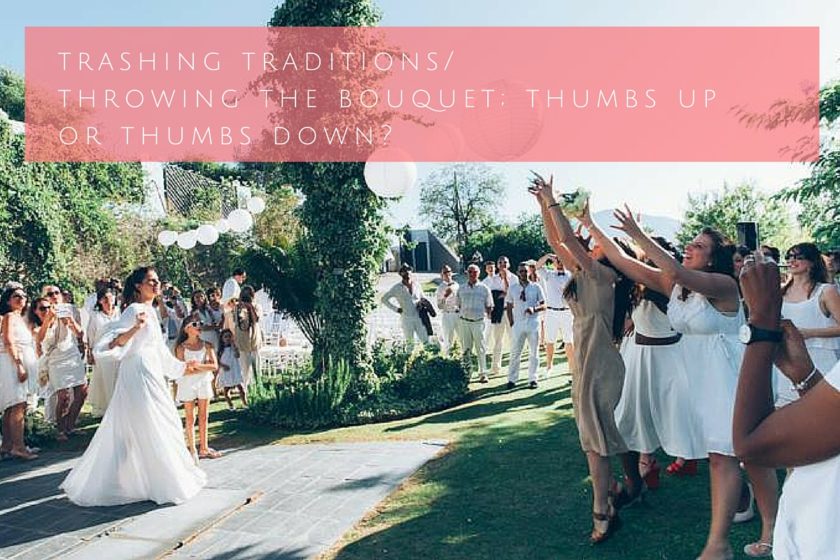 I must say of all wedding traditions, the tossing or throwing of the bouquet has got to be the one which I dislike the most and I’m surprised I’m leaving it so late (third post of the Trashing Traditions series) to get stuck into it! I think one of the reasons for my dislike is because I have been at weddings (as a single woman) when the throwing of the bouquet has taken place and I can remember all too well how I felt about having to take part in something like this. Let’s just say, I did not find it fun, at all.

Even from the very first time that I was a part of it, I never felt comfortable with the whole idea. Single ladies lumped together on the dance floor, everyone else standing around watching and waiting for us to compete for the grand prize; a bunch of flowers and the promise of a speedy path to marriage!

I know it is so easy to write this tradition off as a bit of fun, because in many respects it is and I’m easily the most competitive person on the planet, so you’d think I’d love the idea of winning. But in so many other more important respects, I feel it is so sexist, so antiquated and so completely out of line with how modern women think about themselves.

However, that said, as I say in everyone of these Trashing Tradition posts, I do think that many people include traditions on their wedding day, without giving them a second thought and simply because its tradition. I imagine some brides don’t even think about throwing their bouquet and it might just happen that it gets suggested to them on the day and so they think ok, and go along with it! And some just love the idea of it, whatever its origins and significance, and so you have to respect those decisions too.

I was at a wedding the other day (as a celebrant) and after the ceremony I heard one of the female guests say, ‘I wonder when the bride is going to toss the bouquet?’ I don’t know if the tossing of the bouquet actually took place or not, as I had left by then, but it got me thinking, do people really still expect this to take place? Is it something that women look forward to? I was surprised to say the least. 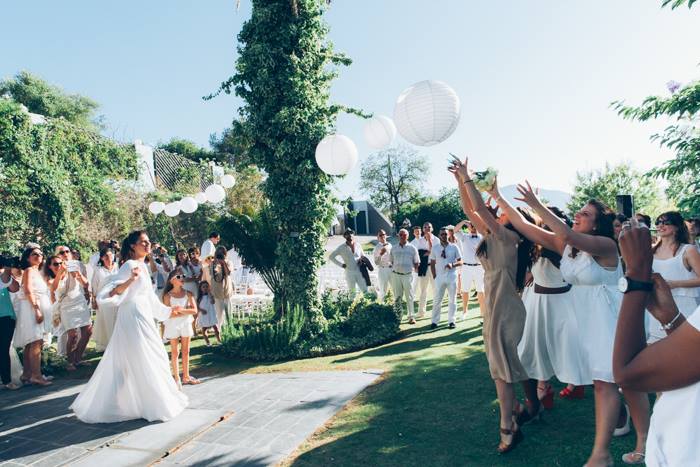 Everyone seems to be having a lot of fun here, so maybe it’s just me! Photo by video4events.

At any wedding I ever attended when they did this, all I can remember is cringing like hell when the DJ announced it was taking place, then running off to the toilets to hide and wait until it was over. My early twenties self, couldn’t stand the embarrassment of being on show with everyone watching as we battled it out to catch a bouquet, now my late thirties self thinks more along the lines of how humiliating and embarrassing it is for female guests to be asked to take part in something like this. But anyhow, before I get on my high feminist horse about it all, let’s see why this tradition even exists at all.

You just have to look at the origins of some of these traditions to see how they are so goddamned crazy in the first place! Supposedly, way way back in the olden days, part of the wedding proceedings involved the bride having pieces of her dress torn and ripped off by unmarried female guests, as they wanted (literally) a piece of the bride to give themselves some future good luck, particularly in the marriage stakes. Then, as wedding dresses became more expensive and brides naturally didn’t want them being ripped to shreds, they they began throwing their garters instead, which then lead to one bright spark one day throwing her bridal bouquet instead of her garter! And so, right there developed the whole idea that catching a bridal bouquet signified good luck and an imminent marriage proposal. Some brides also used to make sure that their bridal bouquet was made up of smaller flowers which they could throw to a number of female guests, rather than have everyone scrambling for one big bouquet, and which also meant they got to keep most of the bouquet for themselves. Good thinking!

So what is wrong with throwing the bouquet, acccording to moi?

Have any of you ever seen any of the videos on Youtube where women end up on the floor in battle, two want-to-be victors refusing to let go of the bouquet or at least giving a good fight for it! Yep, that in itself is bad enough, but here’s some other thoughts.

It’s pointless – Clearly we all know that if we catch the bouquet we are not going to be guaranteed marriage, despite what folklore says, so what then is the point of doing it? Of all the bouquet throwing I have seen, the person who catches it has ten seconds of a victorious high and then everything goes back to normal. I have also heard people say that it doesn’t mean anything, so if that’s the case, then why bother with it???

It’s sexist – as with many of the wedding traditions it is women who get the raw deal. Men are not made to take part in this bizarre wedding game show, they simply get to stand on the sides and watch the madness unfold.

It’s unfair – why is it only women that have to do this, even now? Are women the only ones who want to be married?

It’s old fashioned – because marriage isn’t the most important life goal to achieve anymore for women, as most people accept that being in the right relationship and partnership is far more important than marriage, why then should we still encourage and keep alive this outdated idea?

Is it really fun? – Who is it fun for exactly? The person throwing the bouquet? The women scrambling to catch it? Or those watching? If someone really wants to have fun and games on their wedding day, then why not have a handful of wedding games that are inclusive of everyone and not just ones which pit women together in this very strange and old fashioned wedding game show!

Many brides do seem to be leaving this tradition out of the wedding day, simply because they have better things that they want to do with their bouquet, like keep it and have it pressed or to give it as a gift to their mum or grandmother.

If you like the fun element of this tradition, then why not have some fun wedding games, festival type games that include everyone, like a coconut shy, duck catching (the plastic ones!), skittles and boules and maybe a very English round of croquet? Something that everyone can be involved in, that doesn’t require one set of people to compete among themselves and something which is a silly bit of non-political, non sexist, fun!

Will you or have you included the bouquet throwing on your wedding day? I’d love to know your thoughts.

Ps. For those wondering, I didn’t include this on my wedding day. I love my bouquet too much and I don’t think any of my single friends would have appreciated me making them do this, especially not on our hot sticky wedding day!