No place for homophobia in the wedding industry 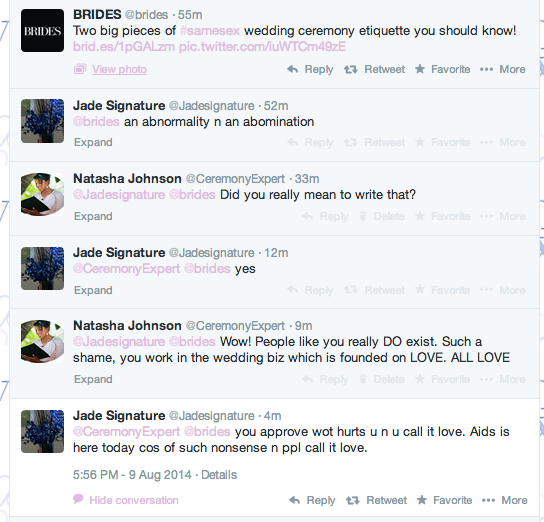 Well, actually let me just start by stating the very obvious fact that there is no place for homophobia anywhere in the world, but for the purposes of this post, I’m narrowing it down to the industry that I work in because that is also my world.

I got a shock yesterday. A real bloody shock. I have been living in a bubble. A nice cosy bubble, cushioned by my normal (some of them), beautiful, culturally-rich, loving friends and family. I have heard about homophobes before, but I seriously thought they were some strange phenomena that exist somewhere in the middle of nowhere that keep themselves to themselves and stay out everyone else’s business. Oh, how wrong and stupid I have been!

They are out there, they are vocal and they do anything from keeping themselves to themselves.

Yesterday, I was checking out my Twitter feed, as I do, first thing in the morning before I’ve even had a cup of tea. I know, I know. How can anything come between me and a cup of tea? Brides Magazine had a feature about etiquette for same sex marriages. I don’t know what it is about Brides Magazine but seriously every time I write down an idea for a post, they bloody well advertise the one that they have done on the same topic!!! Too funny! Well, it’s always going to be hard for my team of one to be one step ahead of their full-on editorial team, who probably work in a real office too! Anyway, I love Brides Magazine, so let me get back to the actual point!

So I clicked on the link, read the article. Yep, great tips indeed, spot on stuff that I do in my ceremonies, a bit of peer validation. Just what I needed first thing in the morning, apart from a cup of tea. When I went back to Twitter, a reply had been made to the link, from Jade Signature. Yes, I am naming and shaming this (insert your own word here, mine may be too offensive). I took a screenshot of the conversation that ensued. Read it for yourself people, and tell me if you don’t feel as sick as I did.

Do you notice that my comments just stop? I cannot waste my time on irrational people. You cannot reason with people like this who think that gay people caused AIDS and that marrying someone of the same sex is akin to marrying an ape. God, that even hurt to write that sentence, let alone to try and make this fool see sense. Why it should bother anyone how two consenting individuals love each other is beyond me. You may not agree with it but why let it bother you?

There are so many things about these comments that keep swimming around my head.

As far as most normal people are concerned LOVE is LOVE, no matter who is doing the loving. This is what I have always thought. This is what anyone in my life thinks. This is how you should think, isn’t it? BUT, I’m not so stupid to believe that there are people out there who don’t think like this and somewhere there is something that says they are within their rights too. Yes of course you’re entitled to your opinion, but that doesn’t mean I can’t find your opinion wrong, offensive and stupid and leaving your comments on a bridal resource is unwarranted, uncalled for and not the place. I’m also not so stupid to be unaware that gay marriage is still banned in so many (too many) countries and cities and it’s ILLEGAL to be gay in many more. *HUGE SIGH*

What I also found a little worrying is that this (insert your word) is followed on Twitter by a massive and I mean massive wedding industry online resource that has over 200,000 followers on Twitter alone and that’s just Twitter. I’m sure they don’t know this person is an idiot but I sure as hell will be bringing it to their intention. They probably won’t listen to me, I know. My tweet will be swallowed up by the masses of wedding tweets that they get from their 200,000 plus followers and Jade Signature is probably a paid vendor who advertises on their website, but I will have my say.

And so to finish now, because my blood is boiling way too much for what it should be on a relaxing Sunday morning. In a way, in a very big way, I am glad I’m out of my bubble. I have obviously been in there for too long. But boy, now I’m out, I am out.