Brides, their dads and aisle ways 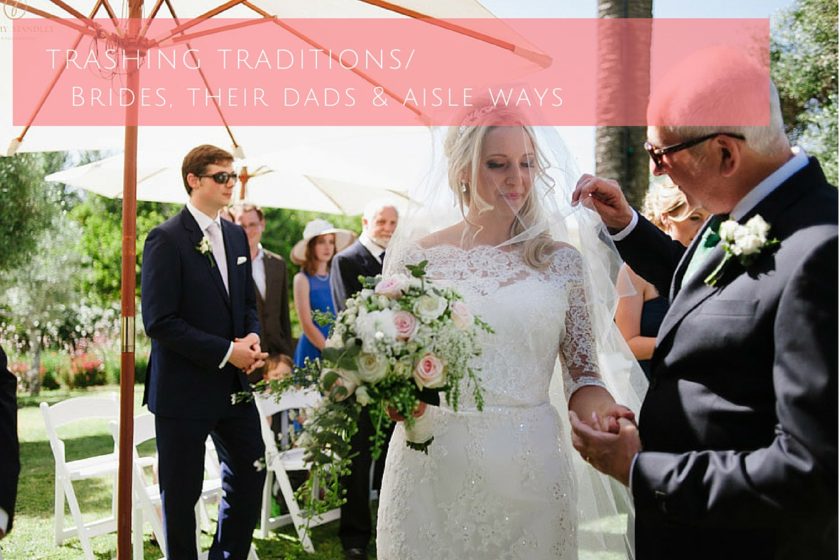 Well, today I am more than a little excited to be diving into the second post of my Trashing Traditions series. The next wedding tradition to be on the end of my trashing stick is the tradition of dads walking their daughters down the aisle. I can’t wait to get stuck into this one, because it’s a biggie and as you know, I’ve always got so much to say! So here goes.

Let me start by saying firstly that I love dads! Yes, I really do, especially my own, and so this post is NOT about trashing dads per se. Secondly, in my role as a wedding celebrant I have seen some of the most emotional moments ever between father and daughter as they set off for their journey down the aisle together. Moments full of love, pride and absolute joy. But what I want this post to achieve it to explore why this tradition exists, which will also explain why it is so HUGELY sexist, and what alternatives there are for those who don’t want to go down this route.

Are you sitting comfortably?

So let’s pretend we’re back at school and we’ve dropped into a history class with me, Ms Johnson. I’m going to educate y’all on some wedding ceremony history! Before we start this little lesson, I feel I ought to remind you/inform you that we are all very lucky. We take it for granted that when we get married, we will marry for love. We will marry the person that we have found all by, and for, ourselves. The person we have fallen uncontrollably in love with and want to take the next steps in life with. We are so very lucky, because most of our poor sisters in the past did not have this journey into married life.

Way way way back, and maybe even a bit more way back, marriage was for many, tantamount to a business transaction. You will see that marriages then really had nothing to do with love, let alone equality! Marriage developed as an institution developed out of political and economic needs. The protection of assets, exchange of wealth, a geographical foothold, even! The last thing that a marriage ceremony concerned itself with was whether the two people getting married were actually in love with each other, or that they had a mutual respect or an understanding of each other! This was not relevant, nor was it a pre-requisite. And sadly, love-marriages happened to just a lucky few! Fathers were the heads of their households, daughters were their possessions. The end.

So as marriages developed over time, so then did the need for customs and formalities to ensure that the promises given by the individuals were governed by contractual and legal obligations, therefore protecting the interests of all those concerned (ie the fathers!) It’s crazy, right? And so when a father walked his daughter down the aisle he was doing so to protect his goods and make sure they were delivered safely and in one piece to the new owner.  Wow, sounds just like an Amazon delivery.

This is why we need to realise that many of the traditions and custom that are still lingering around in current weddings and wedding ceremonies, have nothing to do with love and equality but everything to do with economic benefits, possession of goods, protection of patriarchal interests and legal obligations!

Hopefully that little history session hasn’t blown your minds too much and I really hope if you didn’t know all of that already, that you found it interesting, because I sure as hell do! So before I delve into some nice modern, egalitarian alternatives to these traditions, let me make it clear that I totally do get why brides still choose to have their dads walk them down the aisle. And I don’t think for one moment that any dad does so whilst thinking he is delivering his possessions safely or about the generous dowry/benefits he’s going to receive either! Of course, this isn’t the reason for why we still do this in modern marriages, BUT there are many men and women out there, who are a little uncomfortable with the whole idea of this tradition and feel that even if that’s not why we do this any longer, the whole act itself still is a representation of what it stood for historically, which I kind of have to agree with. Although no one is being physically given away, the act of a father walking his daughter down the aisle, is still a form of ‘giving away’ no matter how you decorate it. And can I add that in some religious ceremonies some clergy do still ask who the person is who is giving the bride away! 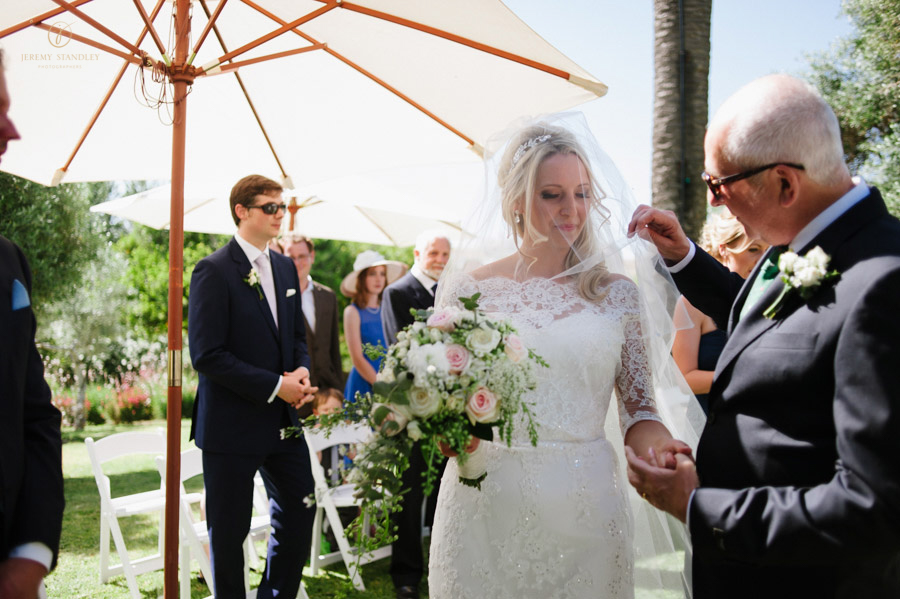 Some women couldn’t imagine anyone other than their fathers walking them down the aisle. Photo by Ruth Blamire-Brown

I have seen quite a lot of wedding ceremonies where brides start their ceremony walk all by themselves. Walking towards her partner in life, all by herself, strong, bold and committed. How powerful is that! In most weddings where I’ve seen this, both parents were present at the ceremony and they had brilliant relationships with them both, but it simply came down to the fact that it was something the brides wanted to do for themselves. If I hadn’t had ninety-nine, really steep, fall-and-you-will-die steps to walk down I probably wouldn’t have had anyone walk me down the aisle. So in the end I choose my two brothers who I adore, because they both are built like trees and so what better to save you than two strong trees. My dad watched on lovingly down below with my mum and the rest of our guests. Making an entrance by yourself is such a strong statement to make and so symbolic too.

If the thought of walking down the aisle by yourself is terrifying, then why not walk in with your husband or wife to-be? It makes total sense. And is SO symbolic and it shows the two of you facing the world and life together, just as you always have done and just as you intend to carry on doing. I love this. For those of you who still want that romantic angle of not seeing each other beforehand and that surprise element, why not have a ‘first look’? This means in private you get to see each other for the first time and have some precious pre-ceremony together time, which can then lead really naturally into the two of you making a wonderful entrance together. 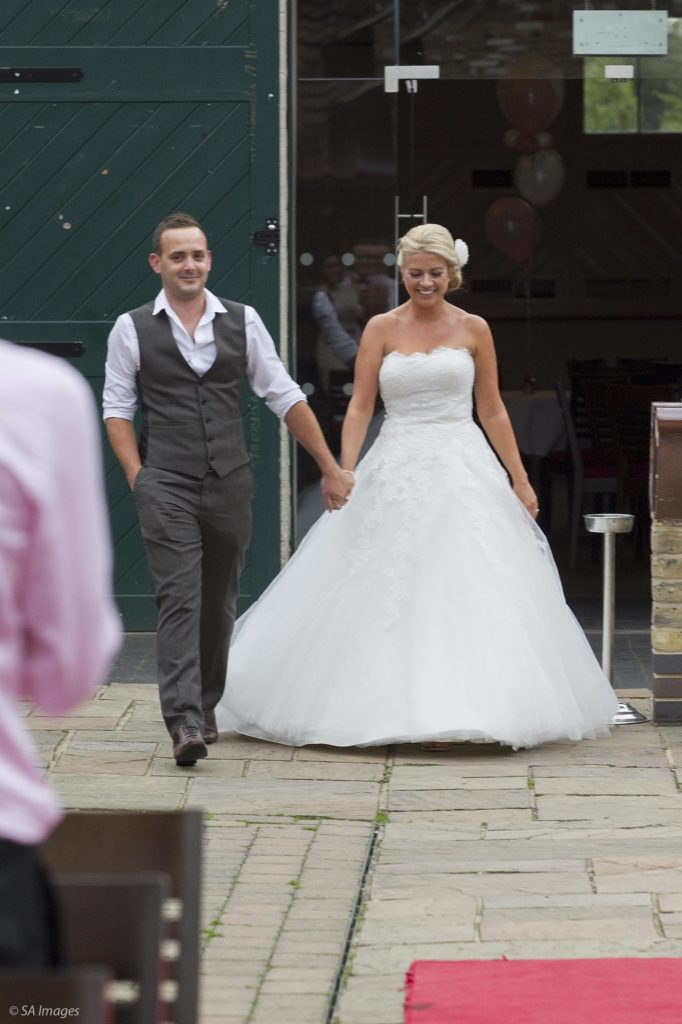 This gorgeous pair said ‘damn you traditions, we’re doing our own thing.’ Okay, maybe they didn’t say those actual words, but they sure did do their own thing! Photo by Soody Ahmed.

If you still really love the idea of parental involvement and giving a special role to those important people in your family, why not use this as an opportunity to honour BOTH of your parents. Hell, mums are just as important as dads, so why shouldn’t they get their moment of glory, too? I have seen this taking place a lot and I can tell you, there is nothing more beautiful than seeing parents walking their girl down the aisle, even parents who are no longer together. 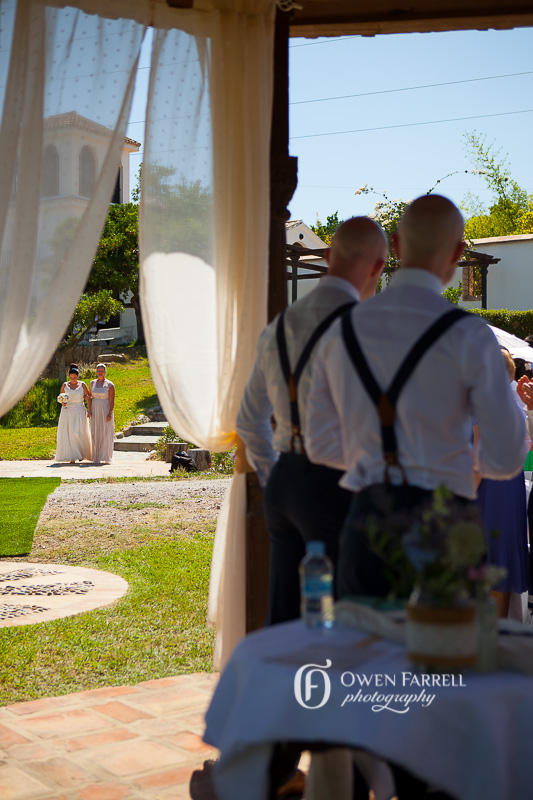 This mum did a beautiful job of walking her daughter down the aisle. Photo by Owen Farrell.

If your father has passed away, you could use this opportunity to have your mum or another close relative to walk you down the aisle. Or maybe you don’t have a good relationship with your dad, and so it is more appropriate that someone else does it. The point is, it should be down to you to choose who you want and who you are comfortable with, not who history and tradition has always dictated was the rightful person! I have had seen the couples’ children, grandparents, brothers, uncles, sisters, best friends and dogs accompany brides down the aisle. Your wedding, your rules.

So there you have it, one more tradition well and truly trashed by moi. As a said at the start, the point of the series is to inform, educate, then decide. You can only do what feels right for you, but I think equally you can only make a decision when you have ALL of the information to hand!

So what will you be deciding on?

How to include a friends’ and family vow in your ceremony

Eight ceremony traditions you can say adiós to

They had me at hello