Everything you need to know about the wine ceremony 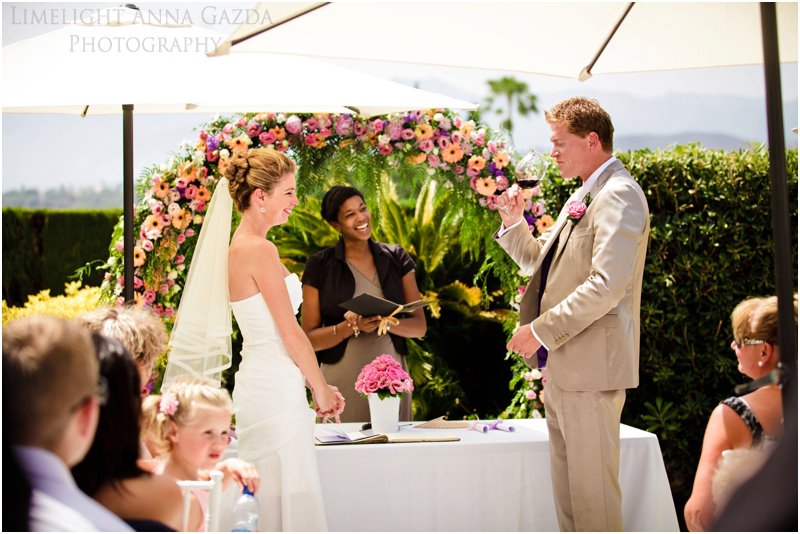 The wine ceremony or ‘cup of love’ as it is sometimes called, is a fab way to include something symbolic and romantic in your ceremony, especially if you are a big wine freak, like me! But apart from getting to have a little tipple during your ceremony (yippee!) there is actually some really cool symbolism attached to this ritual and with some added personal touches it really can be made into a lovely celebratory element of your ceremony.

So as with all ceremonial rituals the wine ritual has a specific type of symbolism. In general, if you look at the prop that is being used for the ritual it usually gives a big clue to the symbolism at hand. So for example, ‘light’ and ‘warmth’ are very much key elements of the candle ritual, and the rose ritual plays very much on the beauty yet prickliness of a rose, which equates to the beauty yet the prickly aspects of love and marriage. And the same can be seen with the wine ceremony. Whichever way a wine ceremony is carried out, in general its most basic premise is that wine contains both bitter and sweet properties which symbolise the bitter and sweet aspects of life.

This year, I have seen more couples than ever choosing to include a wine ritual in their ceremony and I like it. One thing about it that probably really resonates with couples is the ‘real’ message that the ritual embodies. I think couples like the idea of saying to each other, ‘hey, we know life isn’t perfect and we know we are going to have some hard and testing times together, but we’re going to face them together and be the best and the strongest team that we can be,’ without actually saying that. This is what I mean by real; true, honest, pragmatic, with a touch of romance. And what nicer way to acknowledge these sentiments than doing it through a wine ceremony!

As with all rituals they are always open to interpretation and can greatly differ between wedding celebrants, as well as between couples who may want to add their own touches, but generally speaking most wine ceremonies involve the couple sharing and taking sips from a glass of wine, in order to celebrate and acknowledge their future together. Although, I have seen variations of this, where couples have two glasses and swap their glasses over, I personally think the one glass variation has a stronger symbolism because it is effectively saying that the two of you are sharing all of life’s blessings and sorrows together, as characterised through sharing one glass.

In my own ceremonies, I like to explain a little bit about the symbolism, ie that wine is very symbolic of life because it has both sweet and bitter elements and so using wine helps the couple to acknowledge the good and the bad of their relationship, their time together and all that life will through at them in the future.  By each taking a sip of wine from the glass, they are promising to deal with and face the challenges of life together, as a united, (wine-drinking!) team. I don’t know about you, but in my house, some of our biggest problems and challenges are solved with wine, ha ha!

Also, I usually get my couples to have three sips of wine each (alternating sips one by one), so that they toast their past together, their present and their future. The wedding guests usually find it hilarious that the couples drink so much wine and the couples usually find it hilarious that they are slightly wrecked during their wedding ceremony!! I do encourage sips though, not gulps!

Now you must know by now how much I love it when couples just make their own rules and mix things up a bit, and there’s no reason why you can’t throw your own ideas into this ritual. Here’s a few to get you started.

The wine glass doesn’t have to be glass. If you want to be a bit Game of Thrones for example, you could get a really nice silver or gold plated goblet. I’ve seen Scottish couples or couples with Scottish heritage use a quaich (don’t even ask me how you say it, because it’s not as it looks!). If you want something more rustic, you could even go with a deep wooden bowl, one that has been carved with your names even! Okay, so I’m getting a little excited now, but the point is, the drinking vessel can be whatever you want it to be.

The wine doesn’t have to be red. In fact the wine I use, which is almost like a type of sherry is brown. You can use whatever wine you like. Although, white wine is perhaps a less popular choice, as red seems to carry more symbolism, I do know some couples worry that their shaky hands will see them missing them mouths and landing red wine on their beautiful wedding clothes, not to even mention a white/off white dress, so I hear this concern and understand why you may prefer white wine. Or it may just be that you don’t like red wine. Go with whatever wine suits you best.

Choose a wine that is symbolic to you. Maybe the area you are getting married in, is known for its wines, so why not get a bottle (or two) for your wine ceremony? Or perhaps, you might want to get a vintage wine that matures in the year of your wedding or you already own a wine that is special and symbolic to you. There are so may options for the different wines that you can use, that it really is quite exciting! You could even make your own (or not!).  And for an extra touch, you can now buy wines that have personalised labels, so what a lovely little idea that would make, to have a bottle of wine which has your names on, wedding date and maybe a lovely wedding quote or a personalised message.

And lastly, the wine doesn’t even have to be wine. Some couples replace the wine with another favourite drink such as whiskey, tequila, bourbon or maybe even gin or rum. Basically, there’s nothing to say it has to be wine, so if you prefer to have a different type of alcohol, then go for it!

So there you have it, all that you need to know about the wine ceremony to get you started. Can you see yourself including this in your ceremony? Have you got some twists that you can add to this? As always I love to hear about it!

Everything you need to know about passing of the rings