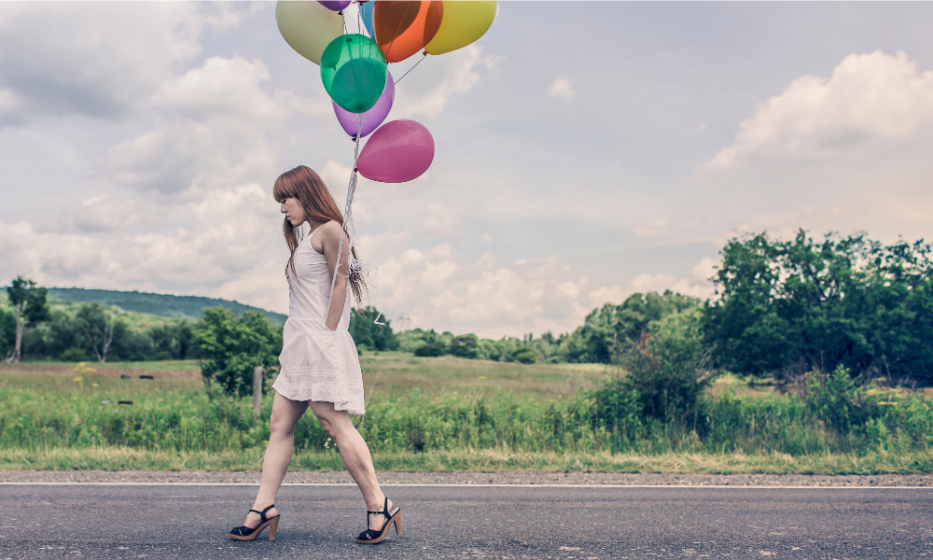 A couple of years ago, in fact one of the first ever blog posts that I wrote for Engaged and Ready was about my experiences of being at a ceremony where butterflies were released.

I must admit that when I knew about the inclusion of a butterfly release during the ceremony I was very excited about it. I love butterflies and I was looking forward to having some close contact with them. As it happens this particular release was no way as awful as the subsequent one that I was unwittingly a witness too. The only abnormal behaviour I noticed was the noise of the butterflies fluttering away inside the box before they were released. However, so as to not repeat myself by going over these experiences again, you can read about them here.

I have wanted to write a new updated piece on this for a while, as my thoughts have changed considerably since writing the last feature and several comments left on that post warning about the dangers of other types of releases and not just butterfly releases really got me thinking about it in more detail.

Up in the air

The symbolic releasing of objects; balloons, Chinese lanterns, butterflies etc are in theory really lovely ceremony elements to have on your day. There is something hugely symbolic about releasing/letting go of an object or various objects, as a way of releasing and showing your love to the world, as well as it being visually stunning too.

The trouble is though, especially as we are now more conscious of our actions as human beings and how it affects the environment and nature, many of the most popular symbolic releases are dangerous and damaging.

In my original post, as an alternative to butterfly releases, I recommended balloon releases. I’d now however like to state for the record that I 100% do not recommend, applaud or support the use of balloon releases or any type of release at weddings.

Not to mention helium balloons and how destructive they are. Helium is a natural resource, which is facing a global shortage, even though it’s the second most abundant resource in the universe. And those foil balloons no matter how attractive and clever they are with all the different shapes and designs you can get, are practically non-perishable. 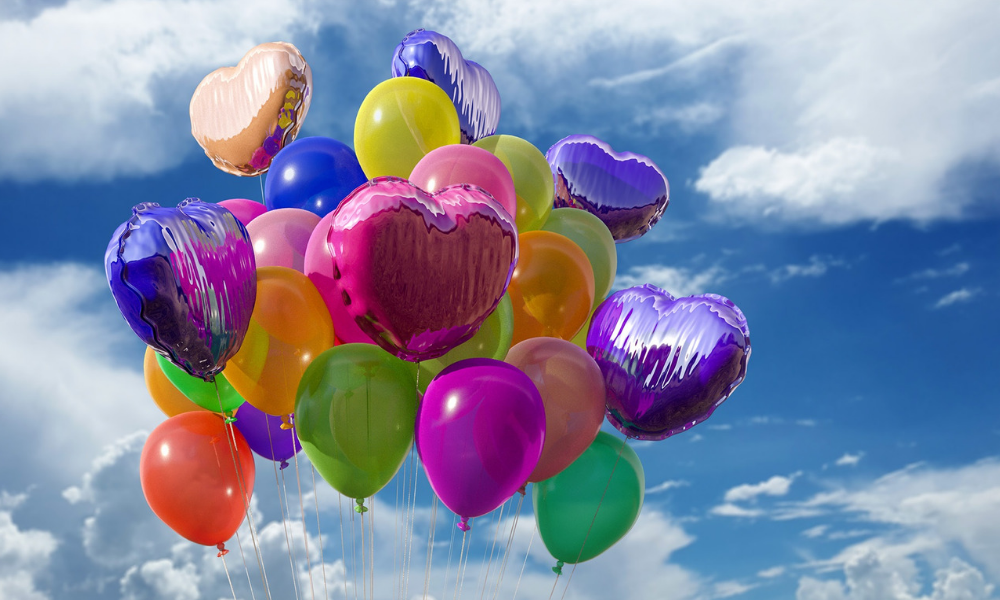 Years ago I had a ceremony where afterwards the couple and their guests released red heart-shaped helium balloons. The ceremony was in a town near to my house, and when I was driving home I could see the balloons making their way up the mountainside towards my village. I’ll admit, I was mesmerised by the release and stood there alongside everyone else and watched as the balloons took flight. It was a stunning sight. Years later I was walking my dogs in the woods and in some undergrowth I spotted the remains of red foil with string and I wondered whether it was from the balloon release. I’m pretty sure it was, but whether it was or not, it was still a balloon that managed to end up trashing a beautiful woodland spot. And it made me so sad to see it.

In my first post where I wrote about butterfly releases and alternatives to them, a commentator posted a link to balloonsblow.org and I tell you what, that was an eye opener. Just click on the link if you want to see for yourself the damage that balloons can cause. Not just to the environment but also to animals and other creatures. Horses fatally maiming themselves because a floating balloon startled them, fish and birds swallowing the debris that balloons leave behind. It’s not good. Here in Spain recently, a whale that was found washed up on the beach had 20 kgs of plastic in its belly and much of that was balloon debris.

So to summarize my thoughts on releases here are the things I think we should be 100% avoiding, not just during wedding ceremonies, but many other life events and celebrations.

Butterfly releases – negative impact on butterflies, there are many other ways to appreciate and show love to butterflies

Chinese lanterns – fire hazards, aviation hazards, and result in littering of the environment and in some cases harming animals

Balloon releases  – terrible impact on the environment and animals

Bird releases  – do we really need to use birds at a wedding? Do we need to use them for entertainment?

There are so many other beautiful things that we can do to add symbolism to a ceremony or wedding day, which don’t impact the environment, or animals. This graphic, which was created by the Balloons Blow Association gives so many heartfelt and meaningful alternatives to harmful and dangerous symbolic releases. 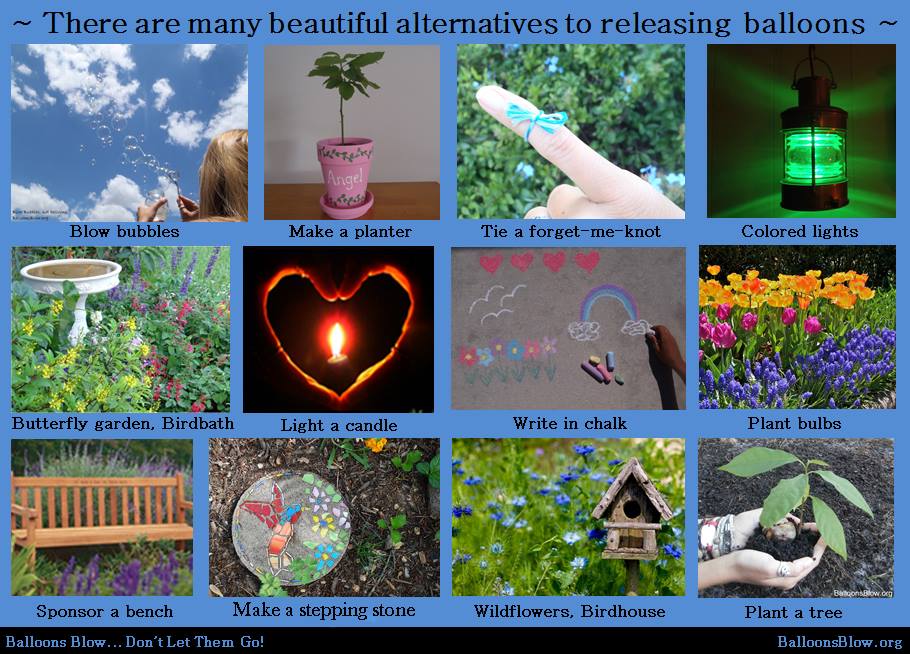 We really do have to take responsibility for our actions on this planet. Can we really release balloons in the air and walk away without thinking of their impact? It’s like throwing loads of tin cans in the air and leaving them to drop on the floor and stay there. The only difference is that the effect of the cans is more immediate, more visually devastating. But both acts without doubt have the same negative effect on the environment.

And the same can be said of the other forms of releases. Can we really trust that butterflies and birds are happy to be released in this way, that it’s an ethical practice which causes them no harm?

Can we not see that the potential fire, environmental and aviation risks in releasing Chinese lanterns outweigh how pretty they look?

As a society, we cannot make such amazing strides in the reduction of waste and use of plastics, and demand the better treatment of animals, yet during wedding celebrations and other events, continue to carry out whimsical, short-lived symbolic releases which go against these advances.

I have never asked readers to share my blog posts before, not in all the years of writing this blog, but I make an exception with this post and ask you to share the hell out of it, for the sake of the environment and the health of creatures directly affected by these pollutants. And also to show the thousands of people who participate in these types of releases, who have never spared a thought on their impact, to now not just spare a thought, but to not do it, and to encourage others not to do it.

Everything you need to know about the honey ritual