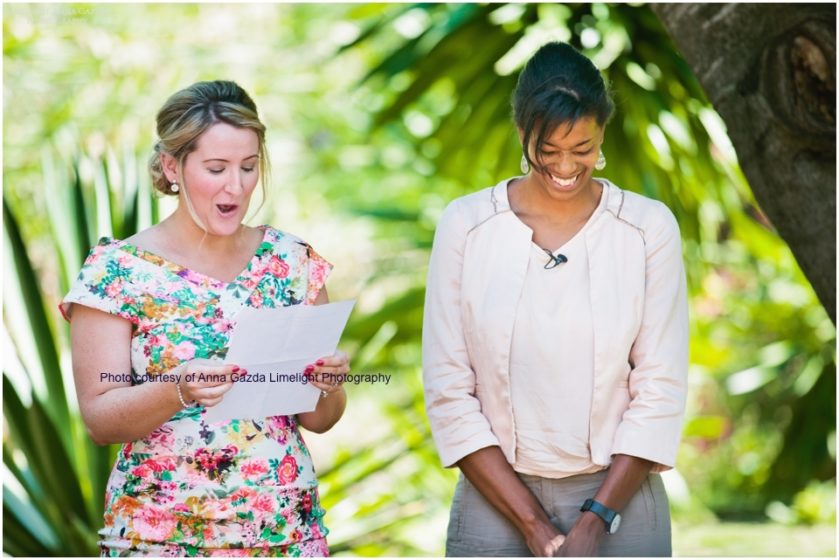 Don’t we all love a love story? Hearing about how how a couple became a couple. Whether it was a disastrous first date, a lucky swipe right, a serendipitous meeting on a train having not seen each other for years, or in my case, the annoying work colleague (him, not me!), who I saw day in and day out. No matter how each couples’ love story begins, more often that not it’s a story worth sharing with your wedding guests.

I am huge fan of love stories and including them on your wedding day, and you can check out this post on how to go about sharing your love story during your ceremony. It’s such an easy thing to do, requires just a little bit of prep and can really be a lovely (fun) personal element to include on your big day. And on a practical note, if you include a story about how you met during your ceremony, it means that if you’re having speeches later on, your speeches can be dedicated to talking about other stuff, and not just how you met.

Most couples who share their love story during their ceremony, follow the normal pattern of sitting down and writing their story together and then either having their celebrant or a close friend or relative read it for them.

This is fab, but now I’ve got a suggestion for how to make it awesome! Rather randomly the thought came to me the other day, of how cool it would be that instead of the couple penning their story together, they pen it separately! Bear with me!

Have you ever thought about how your love story sounds when told by both of you separately? Exactly, just like that! I know for one if you asked my husband about how we met and fell in love, although the general facts would be the same, his would without doubt contain LOADS of exaggerations of how much I fancied him and how keen I was to take things to the next level, whereas my version would be closer to the truth, well my truth, anyway!

So this is my point, it really can be a fun way to hear the same story being told from two different points of view, because two different personalities recounting the same event can make for a hilarious re-telling of a love story. Don’t you agree?

How to do a love story mash-up

So now that I’ve established how awesome this idea is, let’s talk a little bit about the practicalities and how you can actually go about doing it. So let’s get this love story mash-up started. Just like with your vows, or with any element that you include in your ceremony, a bit of preparation and thought is needed to make it work properly.

The easiest way to tell the story is to break it down in to set paragraphs. Before you both go off to write your winning creations, you need to loosely work out the story that you’re telling. Seriously! Not all couples have the most straightforward of stories, so you need to make sure that you literally are both on the same page.

Once you’ve got your story straight, you should then create your paragraphs, so that you both write about the same thing in each paragraph. As with most things, an example can make it easier to understand. So let’s use my love story, as an example.

This would be a rough outline of our story.

Talking about the obvious attraction we had, yet whilst having a mutual dislike of each other too. He being jealous of my constant praise from our boss, me being in awe of his great journalistic abilities despite his talent for highlighting those abilities too!

The moment I knew that my fancying him was not just a phase. After yet another ‘discussion’ about my working methods, I stood up (as he was sitting opposite to me) and gave him a piece of my mind. It was the most epic and classy telling off that you could give someone. Oprah would have been proud of me. Except after I finished and the whole newsroom was by now watching, I went to sit down and totally missed my seat and landed straight on the floor! Yup, I did! My husband says he knew I was the woman for him from that moment!

Too much white wine during a lunchtime date on the embankment in London. Let’s just say it was so bad that I’ve only in recent years started drinking white wine again!! Yup, that bad.

The moment our love for each other was cemented and how only after six months together he proposed to me at the Theatre Royal in London, during the interval of the show, in a special room that he’d organised with the theatre. Ah, he was romantic once, ha ha!

Now, aren’t you just dying to know how my husband would write up his version of events? Well I certainly am. I may just ask him to do it for fun. And actually I already know how different our versions would be as he actually wrote about me missing the chair after my epic dressing down, in his wedding speech and in his version I fell with my legs going right over my head! This is not how I recall the events, at all! But that’s what makes the two sides to the tale even more funny and worth recalling.

So once, you have your paragraphs established, you may want to also roughly set how many lines you will write for each paragraph, your maximum lines. Having maximum lines per paragraph means that when put together, your combined story isn’t too long, but as for the paragraphs themselves, it doesn’t matter if one version’s paragraphs are shorter than the other, as that will show the different personalities of both writers and the different way that each person is able to recapture the story.

So when both you’ve finished writing your stories and you’re 100% happy with them, if you’re having a friend read your story or your celebrant, send them to him or her and have them mash them together. You may want to leave the paragraph numbers and headers on your versions so that it will be clear who has said what and then the person doing the reading can colour code them or name them, so they can read them properly.

The idea is that the first paragraph written by person one is read, followed by the first paragraph written by person two, then the second and third etc. Hopefully, the person who will be reading your combined story will be able to see if there is something that needs fixing once the two versions are together. So there you have in my opinion, the best way to do it, if you want your love story mash-up to be a complete surprise to you both on your wedding day.

You may love the idea of the love story mash-up but not be brave enough for it to be a complete surprise on the day. Well, that’s cool too. There’s nothing that says you can’t see the combined version and actually it might be good to see it to make sure that what you’ve written separately, works when put together. Just fight off the urge to want to change what your love bunny has written, because the whole idea is that it’s one story being told by two personalities, unless it’s really really really bad!

So there you have it. I hope you’re feeling inspired to include your love story in your ceremony, whether you do it as a mash-up or as a normal personalised story. Either way it will be cool for your folks to hear about how your love began and for you to relive it too!