Everything you need to know about the sand ceremony 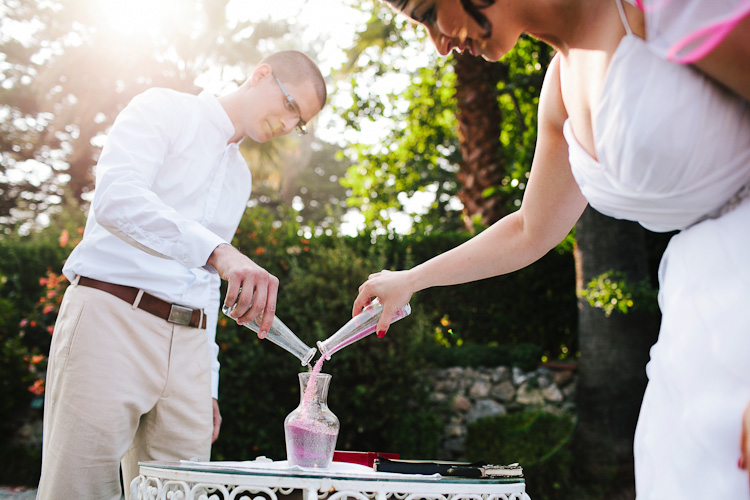 The sand ritual is such a versatile and easy ritual to include in your ceremony and because it’s full of symbolism, you won’t be able to help feeling all loved up and unified when the time comes to blend your sands. And whether your having a beach ceremony or not, a sand ceremony can be a great way to symbolise the love that you both have for each other.

The sand ritual fits into the same category of ritual as the candle ceremony, because in a nutshell, they both symbolise unity and togetherness. As with the candle ceremony there are three physical elements, (three candles) and with the sand ceremony there are three containers or vials. Two vials contain sand and the third will be an empty container which will hold the two sands once they are blended. 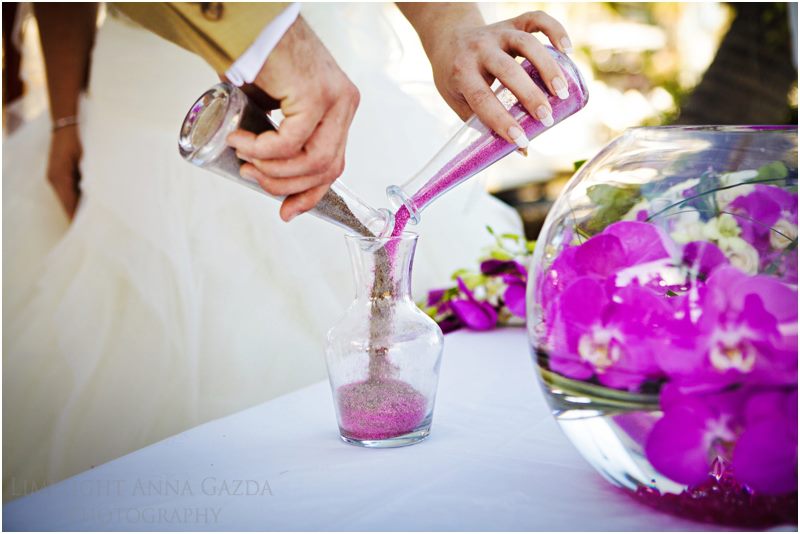 Blending sands is the ultimate expression of unity. Photo by Anna Gazda

So let’s have a closer look at what the sand ritual entails. The idea behind the sand ceremony is that two sands that represent the two individuals getting married are blended/mixed together to create a whole entity. Now what is great about this ritual is that it is super versatile and can be adapted in so many ways to suit your ideals, your relationship and even your wedding colour theme.

There really are no rules as to what types of sands you use or colours, or grains, but visually the more distinct the sands are the better they look when they are mixed. Some couples do use the same sand, but it can look less striking than two sands that are completely different. I had a couple once use some sand from a Norwegian beach, which they mixed with some fine Spanish sand and the end mixture was very unique. The Norwegian sand, well, it wasn’t really like sand, but more like small stones, shingle and pieces of reef, which blended really well with the other sand. And when the Norwegian sand was being a bit stubborn coming out of its container, the bride joked that the sand represented the groom very well!

If you can use sand that does have some symbolism ie it’s from your local beach, or a beach from your favourite holiday, or a beach where you grew up etc, then that of course always adds some extra personalisation to the ritual. I have couples bring sand from their local beach and mix it with local Spanish sands to represent them and their place of marriage. I even had a couple once who had been travelling together well before their wedding and had actually collected some Australian and African sands, which they had enough of to use for their ceremony.

If a sand ceremony is more symbolic to you in what it stands for, then you don’t have to use natural sand at all and can go for artificial coloured sands. This way you can have more control over the colours and the overall look and even match it to your wedding theme. If you only have one symbolic sand available then it can also be a good idea to use a coloured sand as the other contrasting sand. 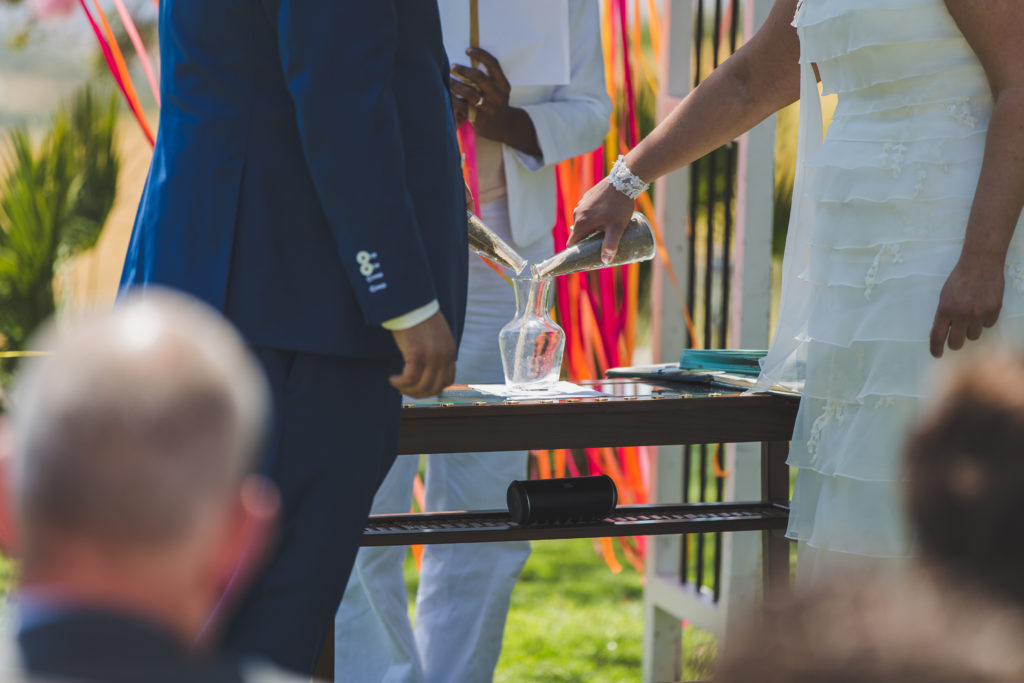 Using sand that is symbolic to you is another great way to personalise your ceremony. Photo by Stephan Colen.

As I mentioned earlier, you need three containers for the sand ceremony. For added prettiness, it’s nice if the two containers holding the sand are the same and the middle empty container is different and of course bigger, to be able to hold the volume of both sands, but there is no reason why all three containers can’t all be different, especially if you have containers that mean something to you.

There are loads and I mean loads of online shops that sell sand ceremony or sand unity containers, so if you wanted to, you could buy a whole ceremony kit, which can include the sand too. Some of the sets have two glass pouring containers and the mixing container is a glass box which the mixed sand will stay housed in forever. You can get really ornate kits, or plain and simple kits, which ever suits your tastes and I’ve even seen personalised kits with the couples’ initials on. The two single containers had their initial from their first name and the mixing container had their joint first name initial (J+S=JS) which is also a nice touch!

If you’re not interested in getting a kit, then small vases also can make for a lovely D.I.Y kit. As long as the middle container has a big enough neck to allow the sand to enter, then you can’t fail!

Generally speaking, containers are always mostly made of glass, so that you can see the sand at all times, and see the lovely pattern that is made when the two sands have poured and intertwined together. However, I have also seen large shells used to pour sands, which was very pretty and very effective. You can with any ritual, do what the hell you like! If I was having a sand ceremony, I can imagine pouring sand from wine bottles into a large deep wine glass. Yep, that sounds just about right for us!

Not everyone wants to buy a kit or it might not be practical to provide your own containers for your ceremony. If your celebrant has their own sand unit kit that you are happy to use for your ceremony, then try to remember to take a glass bottle or container with you to pour the blended sand in to once the ceremony is over. This means you will have some bottled sand to take home and keep as a memento.

Sand is a beautiful element to use in a ritual because it is full of symbolism. Sand looks like a whole unit but it is made of up tiny tiny grains and so this itself fits so wonderfully with the whole meaning of life and how we all as individuals rub along together to make the world what it is. We keep the world alive, rejuvenated and refreshed by blending together and being unified.

Also, the sand can be used to represent the individuals themselves; all the grains in their container symbolising their personality, identity, their characteristics, their idiosyncrasies! And when the two are blended together, all of their characteristics and personalities come together but the individuals still retain who they are. This is why it’s quite nice to use two different coloured sands, or two very different types of sand, to show that although you are unifying and becoming one unit, you are still retaining all that makes you you. Two wholes working together as one, if you like!

At its most basic, the sand ceremony usually only involves the couple pouring their two individual sands into the one containing. But I have over the years seen so many variations. One of my best variations was for a small wedding of about ten guests. Earlier in the day before the ceremony, the guests had collected small stones and shells from the beach. During the ceremony they then placed their items into the container and then the couple poured their sand over the top. The sand and the shells when mixed together looked so lovely and it was also so symbolic to have all of the wedding guests contribute something to the ritual.

I’ve also seen couples with children who share the pouring with their children and some couples invite their mums to start off the pouring, which they then finish. These are both lovely ways of including family members and showing your love and unity towards them too.

The more different the two sands, the more striking the final blend will look! Photo by Andreas Holm.

The sand ceremony is great to use if you are getting married on a beach not only because it’s symbolic but also because you can easily use the sand from the beach as one of your elements. However, the sand ceremony doesn’t just have to be exclusive to beach weddings.

Like one of my previous couples, you may already have some sand that is symbolic to you or you may want to use sand from where you live, because where you are getting married might be in a different area, or different country, so it’s like you are taking a little piece of you/home with you! One of my couples, got married in beautiful garden in the middle of the countryside but they used sand that came from Indonesia to represent the groom’s family (one of his aunts bought it with her for the wedding!) and some Dutch sand to represent the bride’s family (yes, Holland has beaches!!!).

And unlike the candle ceremony, you can do the sand ceremony anytime, anywhere. So the sand ritual is ideal for windy spaces, or anywhere with a slight breeze and at any time of the day, depending on the light you have.

The sand ceremony really is super sweet and super easy to include in your ceremony. And it’s quite incredible how much symbolism and love is packed into the tiny little grains. Welling up yet?

Does this sound like your thing? Do let me know!

A colourful Humanist garden ceremony with a symbolic sand ritual