Stand up for your love: the best ways to stand for your ceremony 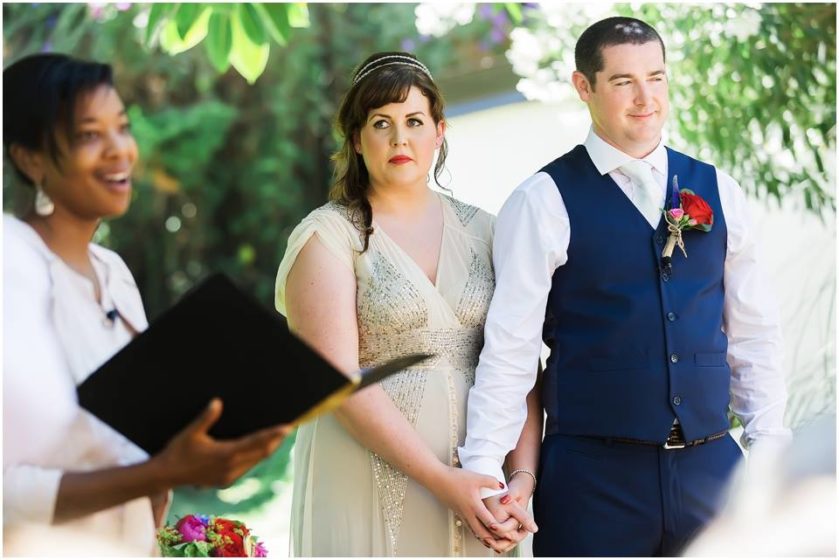 Often when I ask couples whose ceremonies I am going to conduct, how they would like to stand, they look at me as though I’ve asked them if they’d like to stand on their heads. I kid you not. However, I know for a fact that this question along with many others, is just one of those things that many people don’t ever consider and in most cases just rely on their registrar/minister to tell them how they’ll be standing for their ceremony. Of course there is nothing wrong with this, BUT you should at least know of all the options before your big day! No? Why, of course you should!

So firstly, as the first word of my title suggests, I’m talking all about ‘standing.’ If I am being truly and brutally honest I don’t feel that anyone should be seated for their ceremony and obviously I am not including anyone who is physically incapable of standing. In some countries like Spain and Holland, it is customary for couples to be seated during their ceremony in both civil and religious ceremonies. If you’re not having a religious ceremony, where there are more constraints on what you can and can’t do, then I just don’t get why you would be seated. I mean, of course I get it, but I just don’t get it. I do get that perhaps for a long ceremony, there may be a point during the ceremony where couples can or want to be seated but generally I think that couples who can stand, should stand. But that’s just me, and of course, you’re free to do as you please. 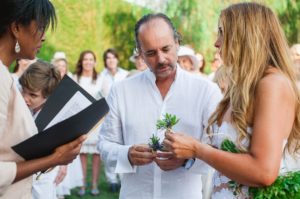 Stand up for your love

Let me explain why. We sit down when we eat, when we’re at school and we’re being taught something, when we’re at work, when we’re watching tv, when we use the loo but sitting down to be married should not be on that list.

Sitting down suggests that you are being a spectator to your ceremony, just like your guests, rather than being a participant to it, which is what you actually are. AND from my point of view as a celebrant, on the few occasions where I have been unable to convince couples that standing for their ceremony is such a nicer way to be, I have found it a little awkward and uncomfortable talking to people whilst I am standing and they are seated. It’s like I’m talking at them, rather than to them and with them. It’s a bit like when you’re at a party or a social do, when you’re chatting to someone who is seated, I don’t know about you, but if I really want to be engaged with that person I would stand up, or sit down to join them. I don’t know, maybe that’s just me, but where a wedding ceremony is concerned I’d vote for standing up all the time.

Back to your guests

Standing with your back to your guests is a standing position that belongs to church ceremonies, where couples are instructed to face the altar, which means they are facing god. So if you are getting married in a beautiful garden setting or in the room of a stunning stately home or luxury barn, there really is no need for you to stand with your back to your guests. You can do if you want, but there is no requirement for it. Of all the standing positions, I would never recommend this to anyone having a non-church ceremony. If I hop back to my party analogy, for me standing with your back to your guests at a party would be something considered a bit rude. You would never talk to someone if it meant your back was facing someone else and excluding them from the conversation, which to me is the same with a wedding ceremony. If you are trying to achieve an intimate feel for your ceremony and your whole day in general, then starting off your ceremony in this standing position doesn’t to me, promote the most friendly and welcoming of moments. But as always, it’s totally down to you! 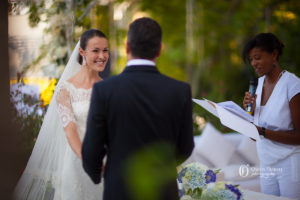 Standing face to face means you have eye contact with your love bunny and hold hands when the moment takes you.

I would say the most common way for couples to stand is so that they are facing each other, so that they are side on to their wedding guests and to their celebrant. This is such a warmer and more inclusive way of standing. It means the love bunnies can see each other and hold hands and be affectionate when they want. And standing so that your hearts are facing each other is so symbolic and damn right romantic. The only downside with this way of standing is that because of the angle that you are standing at, invariably there will be some people who will only see the back of you. 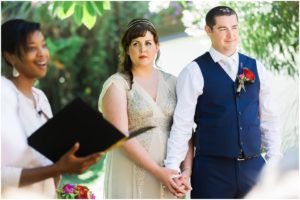 Not only is standing next to each other symbolic of facing life side by side but look at the connection the couple can have throughout their ceremony. Anna Gazda Limelight Photography.

So I have left my favourite standing position to last. Standing side by side, means the love bunnies are next to each other and opposite their celebrant or minister, creating an almost semi-circle shape out of the three people.

This way no one has their back to anybody and I feel that the openness promotes such an amazing vibe for the ceremony, with everyone being able to see everything that happens, which helps to create such an awesome arena of joyfulness. 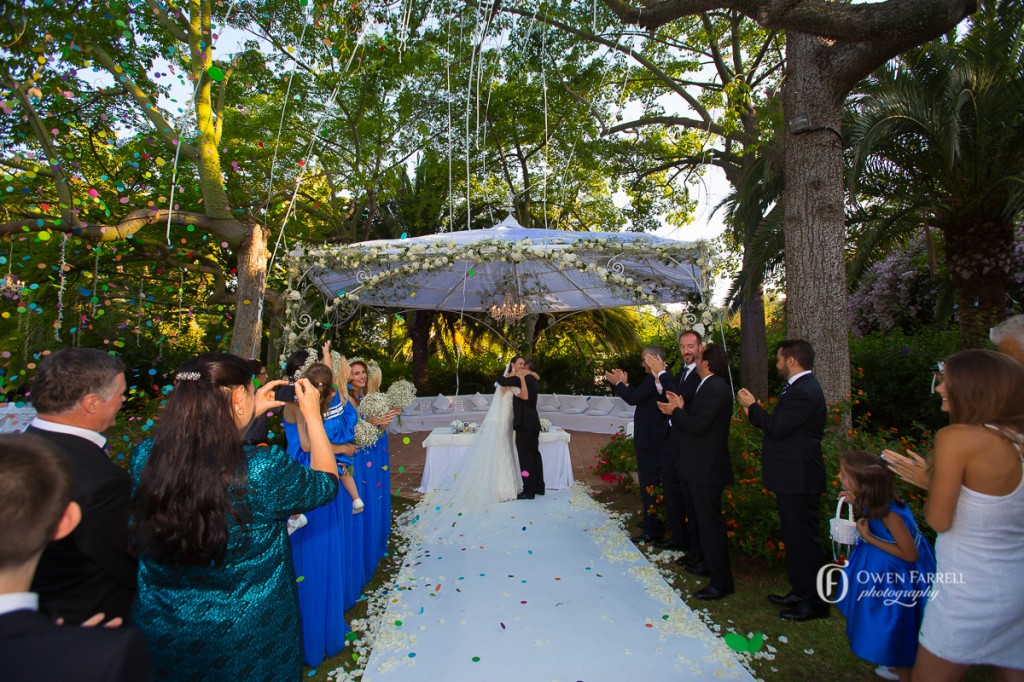 Here all the brides maids and grooms men are lining either side of the aisle. A nice touch!

This can be a nice thing to do for many a reason. Firstly, it’s a really lovely way of showing of your wedding party, and for nervous couples who get a bit jittery with the thought of standing by themselves, may find some comfort in having their wedding party nearby. However, if you’re limited with your ceremony space, then maybe this isn’t the best idea.

Are your guests sitting comfortably?

Another super important thing to think about is how your guests will be seated or IF they’ll even be seated at all. I totally dig ceremonies where couples and their guests are standing. This is particularly fab for a boho beach wedding, a woodland affair or any type of setting where the logistics of getting chairs/benches in place is just not worth even thinking about or simply that the couple themselves want to create a beautiful vibe from having their nearest and dearest standing for the ceremony and enveloping their love! I love this! But I also understand that it’s not for everyone and there may be issues with older guests who can’t stand for long periods of time. 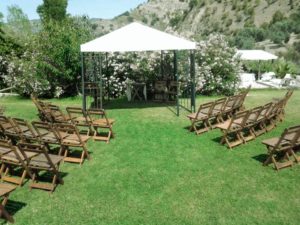 Encircled by your family and friends, encircled by love. Yup, it’s official, I love it!

If you are getting married in an area where you have to provide your own seating for your guests then you really can have fun with this and don’t have to stick the normal layout of blocks of rows/ aisle/ blocks of rows. One way, which I am seeing more and more, is to have your guests sitting in rows of semi circles around you, which I think makes for such a warm, friendly and inclusive way of being seated. It lessens the harshness that blocks of rows can create and there is something about the semi circle positioning, which creates a hug-like affect, so you can only imagine how much I love this. Your loved ones giving you a big symbolic hug. Oh yes! I love it! Semi circles of hay bales looks amazing, too for that more rustic look. 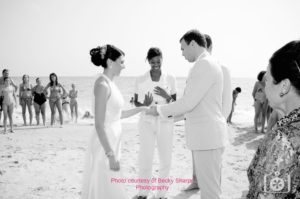 Boho beach weddings are perfect for an all-standing ceremony. Expect some visitors, too!

I’ve even seen this layout taken one step further with guests forming a complete circle around the couple, seated or standing, which again is wonderfully embracing. The only thing with this is, that you will have your backs to some people, but I guess the beautiful feeling of being encircled by your closest peeps may let you forget that you are back-facing to some of them. Perhaps this could be an opportunity to include some sort of new technique where every so often your celebrant addresses you from a different angle so that you will ever so slightly change your own positions so that eventually you will have faced all of your guests at some point or other during your ceremony. Mmmh. Having just thought of this off of the top of my head, I might have to give this a little more thought and try to develop this for a future ceremony. Woo hoo!

So the lesson I hope to impart today, is that there are various ways to stand (or sit, if you remain unconvinced!) and many ways for your guests to stand and sit too. But ultimately, the decision of course is yours to go with whatever makes you feel most comfortable!